We became peace activists of the first hours. Stimulated by the initiative of Hilde Schramm and Bosiljka Schedlich a dedicated group of young and old assembled in the peace center of the Martin-Niemöller-Haus in Pacelliallee, Berlin, each week. In the discussions around the table we analyzed the course and the causes of war in Yugoslavia. We connected with the all-German peace movement that had emerged from the Easter marches against rearmament in the 1960s, its demonstrations against nuclear power in the 1970s and against the stationing of cruise missiles in the 1980s. We learned to say the words “former Yugoslavia”. We witnessed the break of the Green party into interventionists and pacifists. We learned to go from discussion to information to agitation to actions. We learned to work with media, with parties, with local communities, with international organisations and with … armies. 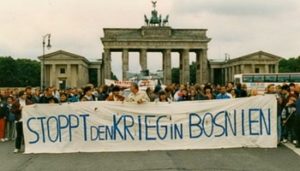